Bangalore is the capital city of the state of Karnataka. Bangalore, as a city, was founded by Kempe Gowda I, who built a mud fort at the site in 1537. But the earliest evidence for the existence of a place called Bangalore dates back to c. 890.

Yelahanka is a suburb of Bangalore in the state of Karnataka and one of the zones of BBMP. It is older than the Bengaluru (Bangalore) city which has now overgrown engulfing many of its neighboring villages and towns. Government First Grade College Yalahanka Bengaluru was established in 2007 now having 3200 students pursuing BA BCOM BBA and MA in Economics and History.

Dodda Basavana Gudi is situated in Bull Temple Road, Basavanagudi, area of South Bengaluru, part of the largest city of the Indian state of Karnataka. The Hindu temple is inside a park called Bugle Rock.

Devanahalli, also called "Devandahalli", "Dyaavandalli", Devanadoddi and Devanapura, is a town and Town Municipal Council in Bangalore Rural district in the state of Karnataka in India. The town is located 40 kilometres (25 mi) to the north-east of Bangalore. Devanahalli is the site of Kempegowda International Airport. A multibillion-dollar Devanahalli Business Park with two IT Parks are coming up on nearly 400 acres (1.6 km2) adjoining the airport. An Aerospace Park, Science Park and a ₹10 billion (US$140 million) Financial City are also coming up. A new satellite ring road will connect the city with Doddaballapur. Devanahalli is situated near the upcoming ₹1,500 billion (US$21 billion), 12,000-acre (49 km2) BIAL IT Investment Region, to be the largest IT region in India.

Bengaluru is the capital and the largest city of the Indian state of Karnataka. It is India's third largest city and fifth largest metropolitan area. Modern Bengaluru was founded in 1537 CE by Kempe Gowda, a vassal of the Vijayanagara Empire. Kempe Gowda built a mud fort in the vicinity of modern Bengaluru. By 1831, the city was incorporated into the British Raj with the establishment of the Bangalore Cantonment. The British returned dominion of the city to the King of Mysore, choosing however, to retain jurisdiction over the cantonment. Therefore, Bengaluru essentially became a twin city, with civic and infrastructural developments of the cantonment conforming to European styles of planning. For most of the period after Indian independence in 1947, Bengaluru was a B-1 status city, and was not considered to be one of India's "4 major metropolitan cities". The growth of Information Technology in the city, which is the largest contributor to India's software exports, has led to a decadal growth that is second to only that of India's capital New Delhi. The city's roads, however, were not designed to accommodate the vehicular traffic, growing at an average of 8% annually, that prevails in Bengaluru. This leads to heavy slow traffic and traffic jams in Bengaluru Bangalore continues to fall behind in this area, and foreign visitors are often shocked to see the state of infrastructure, but now things are improving thanks to heavy investment of the Karnataka Government in infra projects. This is the main problem from migration of people from other states.

Basavanagudi is a residential and commercial locality in the Indian city of Bangalore. It is located in South Bangalore, along the borders of Jayanagar. The name "Basavanagudi" refers to the Bull Temple, which contains a monolith statue of the Nandi Bull. The word Basava in Kannada means bull, and gudi means temple.

Kunigal is a town in Tumakuru district in the Indian state of Karnataka. It is the headquarters of Kunigal taluk. As of 2011 census, the town has a population of 34155.

Kodigehalli is a suburb of Bangalore. B.B.M.P. Ward 8.

Bangalore Fort began in 1537 as a mud fort. The builder was Kempe Gowda I, a vassal of the Vijaynagar Empire and the founder of Bangalore. Hyder Ali in 1761 replaced the mud fort with a stone fort and it was further improved by his son Tipu Sultan in the late 18th century. It was damaged during an Anglo-Mysore war in 1791. It still remains a good example of 18th-century military fortification. The army of the British East India Company, led by Lord Cornwallis on 21 March 1791 captured the fort in the siege of Bangalore during the Third Mysore War (1790–1792). At the time the fort was a stronghold for Tipu Sultan. Today, the fort's Delhi gate, on Krishnarajendra Road, and two bastions are the primary remains of the fort. A marble plaque commemorates the spot where the British breached fort's wall, leading to its capture. The old fort area also includes Tipu Sultan's Summer Palace, and his armoury. The fort has provided the setting for the treasure hunt in the book Riddle of the Seventh Stone. 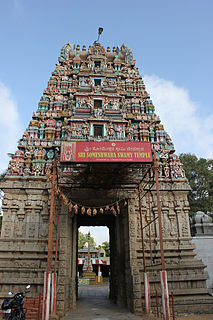 Halasuru Someshwara Temple is located in the neighborhood of Halasuru in Bangalore, India. The oldest temple in the city dating back to the Chola period, it is dedicated to the Hindu god Shiva. Major additions or modifications were made during the late Vijayanagara Empire period under the rule of Hiriya Kempe Gowda II.

Devanahalli Fort is located 35 kilometers (22 mi) north of Bangalore city, at Devanahalli in the State of Karnataka, India. Chieftain Malla Byre Gowda of Avathi, a Vijayanagara empirevassal, built a mud fort in c. 1501 at Devanadoddi. In the late 18th century, Hyder Ali re-constructed the fort in stone resulting in the current structure.

Bengaluru Pete is an area of Bangalore city which was established by Kempegowda I in 1537 with roads laid out in the cardinal directions, and entrance gates at the end of each road. Kempegowda also termed the Pete he built as his "gandu bhoomi" or "Land of Heroes". Pete forms a well–defined body of markets which were associated with various trades and professions of the populace in the locality markets and given the names of trades pursued in such markets. The well known markets are the Tharagupete–market for grains, the Balepete – for Bangles and musical instruments, the Chikkapete and the Nagarthpete for textile trade, the Ballapurpete and the Ganigarapete market where oil is extracted by people of the Ganiga community, the Tigalarapete–flower market of gardeners, the Cubbonpete – textile manufacture by people of the Devanga community.

Bangalore (Bengaluru), the capital of Karnataka state, India, reflects its multireligious and cosmopolitan character by its more than 1000 temples, 400 mosques, 100 churches, 40 Jain derasars, three Sikh gurdwaras, two Buddhist viharas and one Parsi fire temple located in an area of 741 km² of the metropolis. The religious places are further represented to include the few members of the Jewish] community who are making their presence known through the Chabad that they propose to establish in Bengaluru and the fairly large number of Bahá'ís whose presence is registered with a society called the Bahá'í Centre. In the demographically diverse, major economic hub and India's fastest-growing major metropolis of Bengaluru, the number of religious places of each religion reported reflects growth in proportion to the population growth. According to the 2001 census of India, 79.37% of Bangalore's population is Hindu, roughly the same as the national average. Muslims comprise 13.37% of the population, which again is roughly the same as the national average, while Christians and Jains account for 5.79% and 1.05% of the population, respectively, double that of their national averages. Anglo-Indians also form a substantial group within the city.

Hutridurga, also known as Uttari Betta is a fortified hill in the south-east of Kunigal taluk, rising to 3708 feet above the sea level that is located 15km south-easterly to Kunigal, the Taluk centre. Hutridurga is situated about 65 km west of Bengaluru in the state of Karnataka, in Kunigal taluk, Tumakuru district. It is situated off the Kunigal-Magadi state highway (SH94), at a distance of about 7 km from it and 10 km from the Anchepalya industrial area on the Bengaluru-Mangalore National Highway (India) - NH48 near Kunigal.

Chamrajpet is a locality in the central part of the city of Bengaluru. It is bordered by Basavanagudi, Banashankari, Chickpet and Majestic.

Kempegowda Museum is a government museum located in the city of Bangalore, in the state of Karnataka, India. It was established in the year 2011 is dedicated to Yelahanka chieftain Kempegowda (1513-1569) who was the founder of Bangalore city. The museum is located on the first floor of Mayo Hall. The museum has Kempegowda's statue as well as posters and pictures of forts, temples, reservoirs and inscriptions from his time. 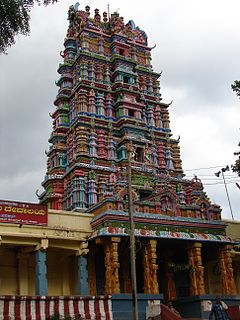 The Ranganatha Swamy and the Someshwara temples are located in the historic town of Magadi, about 41 km from Bangalore, the capital of the Indian state of Karnataka. These temples are protected monuments under the Karnataka state division of the Archaeological Survey of India.