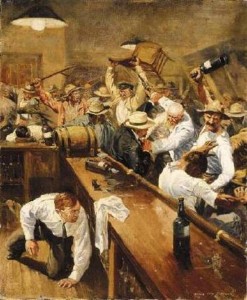 Editors Note: Stephen was my martial arts instructor while I lived in Texas. For over 20 years he’s been a student of the martial arts. Stephen owns his own martial arts school and instructs Jeet Kune Do-the combat system and philosophy that Bruce Lee and Dan Inosanto cultivated. He has had the pleasure of teaching to Law Enforcement, Security Staff and Military Operators. Working in the night club industry in Vancouver for ten years, he experienced some of the best and worst venues in the city. I know Stephen has faced more dangerous situations than he can count. So I asked him to write on how to be smart and protect ourselves when faced with even the worst of circumstances, not just in the case of a bar fight.

In my years as a professional doorman, I can say with pretty solid accuracy, that I have been involved in the better part of 1,000 bar fights. Some were pretty minor, and took just moments to end. Some were all out brawls involving every doorman, and multiple patrons. Some were fist fights. Some were swarms of attackers. Some were broken-bottle-armed assailants intending on inflicting grievous bodily harm onto whomever they could touch.

The key to winning a bar fight isn’t brute strength or the greatest speed. It’s to be smart and prepared. If you equip yourself with the techniques below you’ll have an upperhand in a down situation.

The most basic and fundamental thing that is most often ignored: Prep work=thinking ahead.

If you can look around the venue and have some idea of the lay of the land, you will have some idea as to what to do, or where to head if and when a bar fight breaks out. 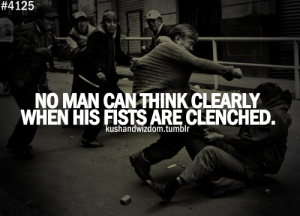 Running is your first, and safest, option. In no way is it a sign of cowardice. The exception to this rule is when you’re cornered, or when you’ve got to protect someone else. Otherwise, knowing how to get out in a hurry is probably the best prep work we can do.

A night of drinking in a potentially hostile environment is just not worth the risk. I have a number of times disengaged from conflict in order to reassess the situation or reposition myself, to wait for backup, or to simply get out of the bar fight. It happens to everyone. Don’t feel like you need to get your butt kicked or worse in order to look tough. Screw it. Toughness is not measured by the ability to take punishment or get yourself killed. Just skip the bar fight.

Want to tell a possible foe you’re not intimidated? Buy him a drink. Befriend your enemy. It’s a bar…Is the cost of a $7 drink easier to swallow than 10 days of healing, or a trip to the hospital?

Your last avoidance option in a bar fight? Get the doorman.

We need to be able to identify threats from as far a distance as possible so that we have time to make decisions. Is someone walking aggressively towards you? Is he moving with purpose towards you? Look for a stiff, unusual stride. Fists and jaw clinched, eyes narrowed, brow furrowed, flared nostrils. They will look like a bull ready to charge.

Is he alone? Is he armed? Who was with him when I last saw him? Are there any people around him or watching him that seem to fit his same profile?

If you’re attacked and running is not an option, you’re aim is to terminate the conflict (bar fight) as thoroughly and hastily as possible. You don’t want to get into a boxing match. I have always said that if you get into it within a group of people, that the first guy you touch you should make an example of him. Crush him. Destroy him in spirit and make the next few day a painful reminder that he picked the wrong guy.

Let’s cover how to get out of a bar fight  ASAP: Entry Point, Middle, Exit.

Could you win a bar fight against a vintage Arnold Schwarzenegger? No? Could you find a way to gouge him in the eye? Yes? If you can cause pain, if you can hurt the person, you can win.

Getting your attacker to wince in severe pain will tip the playing field severely in your favor. If they are in pain, for a moment they cannot attack. They will be so thrown off guard you can come in for a flurry.

Best ways to cause pain:

Eye Gouging-It is terribly easy to touch someone’s eyeball as they are coming in to tackle or hit you. A poke is great, but even barely wiping their eye will disturb them enough for you to terminate this conflict.

Elbow to Knuckles-As your hands are up to guard your face, keep your elbows up a little high. If they are throwing punches, they must make throw a strike that’s in line from their face/body to your face. If you can intercept that line with the point of your elbow, they’ll easily injure-even break-their own knuckles against your much harder elbow.

Groin Strike-A kick to the groin can help end a fight quickly. But this is actually more difficult than it may seem. If you’re going to try a groin kick, commit to it and pull it back as quickly as possible. Lessen the chance they can grab your leg, and at the least hurt them in case you don’t hit the mark.

As you’re throwing kicks, don’t forget to keep your hands up and protect your head. Strikes can come from any direction during a bar fight.

Middle-Get them to back pedal

As soon as your opponent is hunched over in severe pain from a poked eye, broken hand, or paralyzing groin strike, LITERALLY run at them punching as fast and hard as you can. Don’t worry about being a professional and landing all your strikes. Get this person backing up, tripping, and in a daze.

More elbows to the head, wiping of the eyes, headbutts, and knees to the groin. Mix it up very quickly and get out. Exit.

Rules of Engagement in a Bar Fight 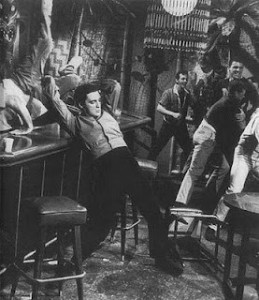 Rule: There’s no cheating in a street or bar fight. Groin strikes, punches to the throat, eye gouging, it’s all acceptable if somebody is out to hurt you.

Rule: Get your back to a wall. Don’t let someone sneak up on you.

If there is more than one attacker, or he’s twice your size, grab an equalizer. A bottle is a great weapon (Corona bottles break the best; Heineken the worst). Just get your hand on anything you can use. I once hit a guy with a fire extinguisher. That ended the fight quickly. Absolutely don’t introduce a weapon unless you’re outgunned and outnumbered.

The reality is if you’re throwing punches you’ll likely walk away with a broken hand. But if you can take those hard bones in your fist and hit a softer point, you can cause damage while not injuring yourself.

Striking, as in punching and kicking can be extremely useful when in the proper range. But these are learned skills that require time and effort to practice, master and maintain. Slamming a mans head off a wall or bar top are not that difficult to do. So use the immediate environment around you to your advantage in a bar fight. Shoving a distracted or already injured man (from our initial shot to the eye, etc), is also greatly advantageous. You’ll be surprised how much a shove can do.

Rule: Get a hold of something-and yank it

I like to get control of the head or arm just above the elbow, gaining control of a choke point on the body. I take this from a Filipino art that is under the Kali umbrella called Dumog. The art uses weight displacement and balance points to move your opponents body around, causing disorientation and opening doors for insertion of pain.

The point is, get a hold of something on him and yank it. If we have already caused a visceral pain response in him, he is going to be relatively ‘soft’ and easier to move around or be thrown out of the way. Now that he is moving and fighting to regain his balance, HIT HIM!

Rule: Get back to your feet

Just about the worst possible place to end up in any fight, especially a bar fight, is on the ground. First off, there is the initial impact when you fall, that can wind you and cut down your ability to fight by 50% or more. Then there are the environmental factors we have to consider, like broken glass. After all, it’s a bar, and there’s a fight going on.

In the past 5 years the growth of the UFC and other MMA organizations we have seen a serious growth in people’s ability to fight on the ground. Brazilian Jiu-Jitsu, Pankration, Judo and Collegiate Wrestling are a few of the arts that we can pretty much expect to see people using in fights these days. Which gives us an even better reason to get up off the ground as quickly as you can in a bar fight. The longer you stay on the ground the higher the possibility of getting seriously hurt. So do whatever you can to get back to your feet.

Just because the bar fight is over doesn’t mean you are safe.

If you just got your ass handed to you in a bar fight are you going to just let it go? A complete douche might call their buddies and wait around to beat up the guy that embarrassed them.

The point is, get out now.

How to Win A Bar Fight Review

Prep Work. Be aware of your surroundings. Who else is in the bar that night and what potential is there for conflict?

Identification. See the faces and make mental notes of who may be a threat.

Avoid the conflict at all cost. When in doubt, get the heck out.

Terminate the conflict. Remember that this isn’t a competition, it’s literally your life on the line. Fight like it.

Tactical Disengagement. I will quote from the great Monty Python’s Quest for the Holy Grail, “Run away! Run away!” 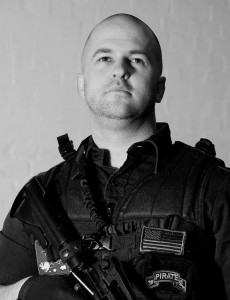 I hope that the information we have covered here will be of help to you as you make choices to head out and have a good time with your friends. Let me leave you with a final thought:  Be wary of those you call enemy, but be wise with those you call friend.