Anti-human trafficking activists say that not much has changed on the ground; but what has changed is the tactic of these rackets.

In August 2017, a minor's mother in Hyderabad had approached the Falaknuma police station, with a complaint against her husband and his family, who ‘sold’ their 16-year-old daughter to a 77-year-old Omani national for Rs 5 lakh. What followed was a detailed investigation by the police, which had uncovered a massive nexus. The investigation culminated in the arrest of 20 accused, including five from Oman, three from Qatar and eight from other Arab countries, in September 2017.

The police said that the well-organised racket involved 'agents' in Hyderabad and Gulf countries, who lured poor families with the promise to pull them out of poverty and convinced them to marry off their daughters to sheikhs and other rich foreign nationals.

The police said that qazis (Muslim cleric) were also part of the elaborate network to perform the 'nikah' before the agents forged the documents of the minors and trafficked ‘the new bride’ out of the country.

It has been little over a year since the investigation and the police said that such cases have stopped taking place in the city. However, anti-human trafficking activists say that not much has changed on the ground; but what has changed is the tactic of these rackets. 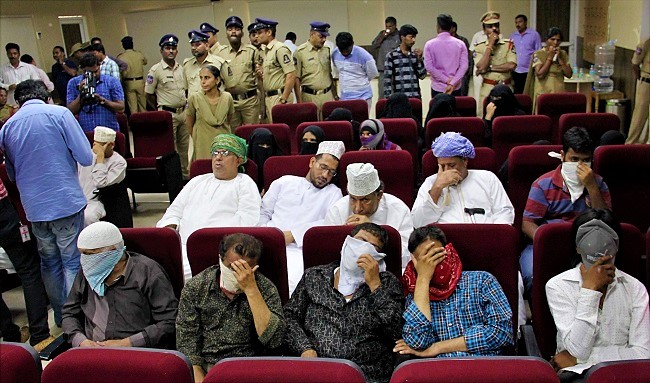 A change in tactic

In the winding lanes near Charminar in the heart of Hyderabad's old city, is the office of the Shaheen Women’s Resource and Welfare Association, run by activist Jameela Nishat.

For close to two decades, Shaheen has been working on the ground and exposing the ‘child bride’ racket, conducting sting operations, rescuing victims, offering legal counselling and training the survivors to make them financially independent.

"It has not stopped and it won't stop any time soon. It is a systematic problem and not easy to get rid of," Jameela tells TNM.

There are two ways in which the racket continues to operate. In the first modus operandi, sheikhs and foreign nationals make arrangements to traffick young women and minors to their country and perform the marriage there. Or, they come to India on a short-term visa, 'marry', stay with the minor for two or three months in India and then 'divorce' them, Jameela says. The latter continues to thrive in the by-lanes of the old city.

Explaining the reason why such rackets thrive, Jameela says, “Agents identify families who live in abject poverty. Most of the times, the person who gives the minor away is usually the stepmother or the stepfather, if not a relative or a neighbour.” 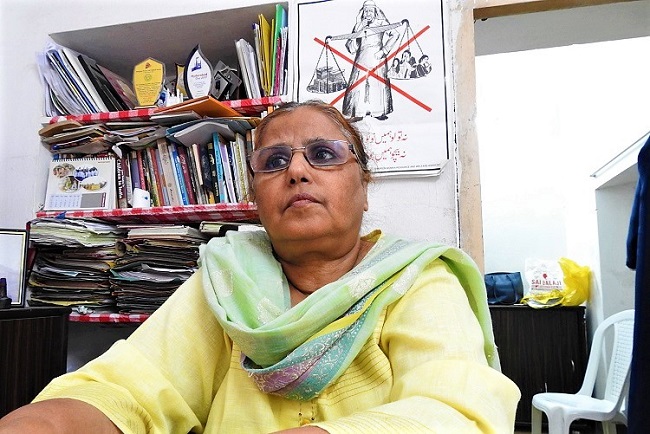 The marriage of minor girls to foreign nationals is not new. The beginning of this crime can be traced back to the 70s and 80s when many locals started migrating to Gulf countries in search of jobs. Soon, they realised that women who could be married off to sheikhs would get a lot of easy money, which they could send back home, thereby pulling their families out of poverty.

The members of Shaheen say that women, who bear a disproportionate burden in the families, are often treated as subordinates who can be trafficked for sex in exchange for money, with little freedom to make their own choices.

How the nexus works

Growing up in Hyderabad, Begum* had a troubled childhood as her father was an alcoholic, who would often physically abuse her mother. Her mother was a domestic worker and Begum often grew up seeing her parents fight. In 2010, her father killed himself, when Begum was 10 years old. In 2013, her mother also passed away after her health deteriorated.

The minor began staying with her maternal grandmother and uncle’s family. When Begum was 13, her aunt discontinued her education and sold her off to a Sudanese national, who was over 50 years old.

The 'marriage' was performed over the phone and Begum was trafficked to Sudan, where she was locked in a hotel and sexually abused every day, for weeks. Somehow, with the help of embassy officials, she managed to return to India, only to be rejected by her family.

"There are male agents and female agents but only the latter work on the ground and scout slums in areas like Shaheen Nagar, Golconda, Vatepally, Talab Katta, Medhipatnam and identify vulnerable minors. Following this, the female agents befriend the family and convince them to marry off their daughter to these sheikhs," says Rehana, an activist with Shaheen, who has been conducting sting operations since 2004.

Sheikhs come in batches of five or 10 on visas, on the pretext of a personal visit or medical treatment. They arrive on different flights at different times. A driver, arranged by the agent, picks and drops them at a hotel.

"When the time comes to parade the girls who are up for sale, a large hall is booked and all the sheikhs are seated in the room. The minors are often accompanied by the family, who wait outside, as each girl walks into the room to be sized up by the sheikhs. While the female agents ‘dress up’ the girls for the ‘suitor’, the male agents coordinate with the sheikhs and strike a deal with them. It is only during the ‘selection process’ that the male agents see the minor,” Rehana explains.

Minors are generally aged between 12 and 16. “In all my years of conducting sting operations, I am yet to see a sheikh aged below 50,” Rehana adds.

“If a sheikh likes a girl, he gives her up to Rs 1,000 on the spot or some gold or a gadget like a phone. The minor often does not understand what is happening but they are generally happy at that moment because they are often showered with gifts that their parents would not have been able to afford,” Rehana elucidates.

If the foreign national plans to stay in Hyderabad for only a month or two, minors are sold off for anywhere between Rs 5,000 and Rs 50,000. If the minor is to be trafficked out of the country, the cost runs into a few lakh.

“The agent receives 50% of the amount as commission, while the remaining goes to the family. However, the family also has to spend on the nikah and they often oblige, hoping they would get more money from the sheikh in the future; and the agents prey on such hopes,” Rehana points out.

Within a day or two after the 'selection', all parties meet at a hotel and the qazi is called to perform the 'marriage'. With the nexus taking the heat in the old city, activists say, some of these meetings are also held in hotels in areas like Banjara Hills and Nampally.

“Meanwhile, the agents also arrange for fake documents to show that the minor is above 18. Many times, when the couple sign papers for the nikah, papers for talaq (divorce) too are slyly placed underneath, and the minor signs it without realising it,” Rehana says.

“This ‘marriage’ lasts anywhere from 15 days to three months, depending on the whims of the sheikh. He sexually abuses the minor on a daily basis after taking up a house or lodge for rent in old city itself. Once the sheikh is 'satisfied', he divorces her and goes back," Rehana adds.

In cases where women have been trafficked abroad and married, they are labelled promiscuous and given a divorce within a few months as well, following which they are forced to return to Hyderabad.

What happens to the survivors?

Once exploited by the sheikh, the minors are often in dire straits. Left with no choice, they end up marrying another sheikh, as marrying local men would mean that they would have to pay for the dowry.

"Many gruesome cases have come to light. We met a minor who had been married to four different sheikhs by the time she was 18 years old. Finally, she married a man who she was in a relationship with, and it worked out. There are even cases where women have married 10 to 15 times to different men,” Jameela says.

Another tragic tale involved a minor who was married 17 times to different sheikhs and exploited until she ultimately took her life.

"After these minors reach a certain age, like around 25 to 30 years, we have seen some becoming agents themselves, because it is the only way they can make money. Through our training programmes, we have managed to keep a check on this dangerous business, albeit it continues," Rehana adds.

If the minor has been trafficked, then the entire issue is even more problematic, as it becomes an international issue. Unfortunately, the embassies have limited power to intervene, like in the case of the minor who was sold off to a 77-year-old Omani national.

In June, in a shocking turn of events, the Indian Embassy in Muscat said that they could not bring the minor girl back to Hyderabad, because she claimed to be ‘happy’ with the man.

“The Embassy had requested the Omani authorities concerned for repatriation of the minor. They have informed that she has indicated to them in a written statement that she is happy with her husband and does not want to return to India and that she wishes to continue staying with her husband in Oman," the Embassy tweeted. 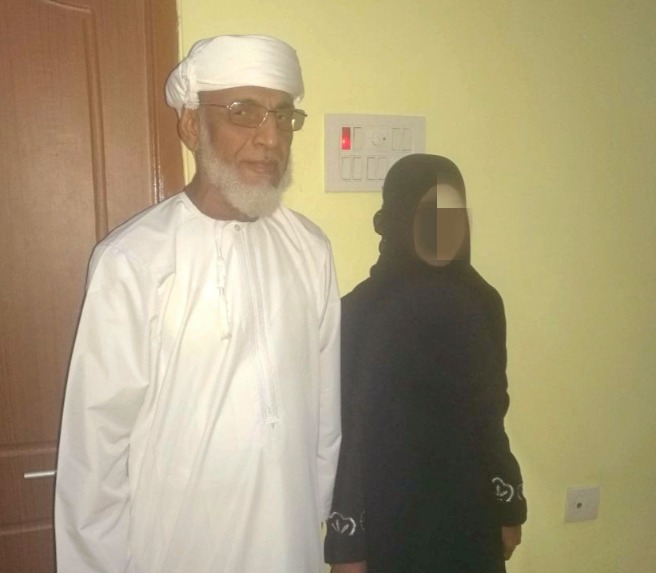 After facing flak, the Embassy’s Twitter handle had said that they would try and ascertain if the minor is willing to speak. However, there has been no update since then.

Is there a solution?

Many who work on the ground also point out that the police is only looking at cases that have been reported, which is only a fraction of the real problem that plagues the city.

“Just because cases are not being reported or are going unnoticed, it does not mean that it isn’t happening. Only if there are problems in the ‘sale’ or if the relationship has gone sour would the family members approach the police. Otherwise, such incidents continue to happen unperturbed,” says Amjed Ullah Khan from the Majlis Bachao Tehreek (MBT).

“The police has no data to figure out how big the problem is. A special team needs to be formed to track such cases. Until then, they cannot claim that the number of such cases has reduced,” says Amjed.

According to Jameela, on the ground work and strong policies are the need of the hour.

“Firstly, we must promote better education for girls and increase literacy levels. Secondly, the mindset of the people has to change, because poverty will continue to exist. Awareness programmes and campaigns on social issues need to be conducted so that even parents and family members are sensitised,”  Jameela says.

"In terms of introducing a policy, we need to have a stringent check on aged foreign nationals entering the country and we must examine if their requests are genuine. Even when they leave, we must track their activities during their stay in India. We must also keep track of women who are leaving on 'khadama' visas and with fake documents," she adds.