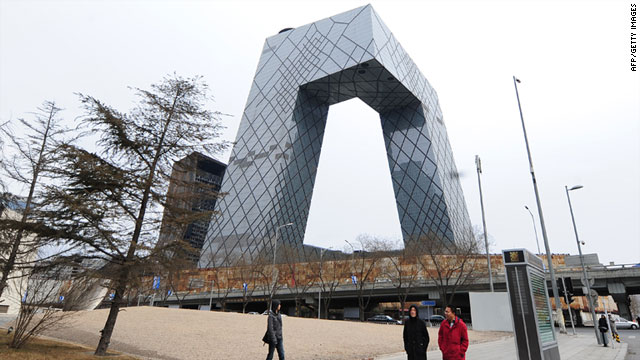 Editor's note: David Frum writes a weekly column for CNN.com. A special assistant to President George W. Bush from 2001 to 2002, he is the author of six books, including "Comeback: Conservatism That Can Win Again," and is the editor of FrumForum.

A recent Pew poll finds that 47% of Americans regard China as the world's pre-eminent economic power. Only 31% rate the United States as No. 1, even though its economy, at today's exchange rates, is almost triple the size of China's.

"For the U.S. visitor, the comparisons start from the moment one departs Beijing's South Station, a giant space-age building, and boards the bullet train to Tianjin. It takes just 25 minutes to make the 75-mile trip. In Tianjin, one arrives at another ultramodern train station -- where, unlike New York City's Pennsylvania Station, all the escalators actually work. From there, you drive to the Tianjin Meijiang Convention Center, a building so gigantic and well appointed that if it were in Washington, D.C., it would be a tourist site. Your hosts inform you: 'It was built in nine months.' " Official: China not a threat to U.S.

The reasons for American self-doubt are obvious and overwhelming at the moment. Still, a little perspective:

-- In the fall of 2008, some 300,000 Chinese children were poisoned when a Chinese dairy adulterated its infant formula with melamine in order to dupe testing machines into recording a higher protein content.

-- Perhaps the most impressive building in Beijing is the Chinese Central TV tower designed by the Dutch architect Rem Koolhaas. Formally opened in January 2008, the tower remains unoccupied because of fears about its soundness.

-- The price of cooking oil rose 27% in China last year, reports the Wall Street Journal. China is gripped by price inflation that has triggered a wave of strikes and protests across the country. You might expect China to suppress the inflation by tightening the supply of money. A tighter monetary policy, however, would cause the Chinese currency to rise, undercutting China's ability to export to the U.S.

-- In August 2009, three Chinese died of the same plague that caused the Black Death in Europe. For an advancing country, China is strangely vulnerable to infectious diseases, including the H5N1 variant of avian flu that has killed some 300 people.

-- China's population is rapidly aging as Chinese families have fewer children. China's working-age population will not increase between now and 2030. But the number of people 65 or older will triple.

I don't cite these points to deny the impressive reality of China's economic rise. That rise represents a colossal fact of the modern world, a challenge to China's neighbors, competitors and oftentimes to China itself.

Yet it's important not to lose sight of the other truth about China, a country facing problems as huge as its achievements.

The big prestige projects that impress Tom Friedman are real, but so equally are the squalor of the conditions in which most ordinary Chinese still live. The cities gleam, but 800 million Chinese still live in the countryside subject to the arbitrary power of local Communist party bosses.

China holds hundreds of billions of dollars of U.S. debt. But it bought that debt not as a favor to us, but as an unwanted byproduct of the currency manipulation that keeps China's currency artificially cheap.

Perhaps the most telling verdict on China's current situation is rendered in "Capitalism Without Democracy," an important book on Chinese entrepreneurs by Kellee Tsai: Almost unanimously, they wanted their children to leave China.

Americans worry intensely about competitors and rivals, potential and actual. Back in the 1960s, Americans feared the "terrifying efficiency" of the centrally planned Soviet economy, to borrow a no-joke famous phrase from the British politician Richard Crossman. In the 1980s, Americans felt themselves lagging behind "Japan as Number One," the title of a 1979 business best-seller.

Today? Today we have Pew. I'm glad Americans are worrying. I'm confident that the worry will inspire Americans to adapt and improve. But the superpower of the future? You'll find it at the same place on the map in 2030 as in 1980.

The opinions expressed in this commentary are solely those of David Frum.